CONGRATULATIONS CLASS OF 2020 HALL OF FAME

The Dunwoody High School Hall of Fame was reestablished in 2006. Dunwoody has a proud academic and athletic heritage; we are happy to be able to honor that legacy. The Hall of Fame honors coaches, counselors, teachers, and bestows awards in the names of one Dunwoody’s most beloved principals, Dr. Jenny Springer, and counselors, Ms. Mary Frazier. The Hall of Fame Committee also added the Life Time Achievement Award.

The DHS Hall of Fame Inductee Class is selected every other calendar year.

The panel takes into consideration many factors in the selection process. The Inductee Class typically consists of seven* Hall of Fame Inductees:

*However, depending on the stack of nominations presented to the selection panel, those numbers may be adjusted.

Once selected, the Hall of Fame Class of Inductees will be asked to participate in the following festivities: 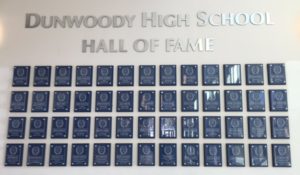 Do you know a deserving individual who meets these qualifications? Nominations are being taken throughout the year.

DHS Community Association Board of Directors